To Join Your Neighbors in Defending Rights, Text "RIGHTS" to 80123.

Constitutional Law Has Been Suspended

(and Martial Law has been Implemented in Idaho)

1st Amendment - Governor Little’s order demands that there be no gatherings “of any number of individuals outside the household.” This is a clear violation of the first amendment which plainly states that the government shall make no law prohibiting, “the right of the people peaceably to assemble.”

Additionally, the 1st amendment expressly prohibits the government from restricting the “free exercise” of religion, which includes attending church services in groups. Brad Little’s ordinance also prohibits church services and church gatherings which is a clear violation of religious rights and an apparent attack on religious liberties.

5th Amendment - The 5th Amendment of the Constitution expressly states that no person shall be deprived of “liberty...without due process of law.” Case law has established that this means that Americans have the right to travel without being impeded by the government. This right has been clearly established in numerous cases throughout history; however, Governor Little’s order as published states, “All non-essential travel must cease.”

14th Amendment - The equal protection clause of the 14th Amendment clearly states: “nor shall any State...deny to any person within its jurisdiction the equal protection of the laws.” Governor Little’s order does that very thing. It defines certain businesses as “essential” while others are “non-essential.” This effectively gives certain businesses the privilege of staying open while others must shut down.

SUSPENDING THE CONSTITUTION IS ILLEGAL

The Constitution is the highest law of the land and no law may usurp or override rights held by the people as expressly written in the Constitution. “Emergencies,” “crises,” or any other circumstance may not suspend Constitutional rights; otherwise, the Constitution means nothing as it can be set aside on a moment's notice in the name of anything.

To further underscore this point, note what has already been written about this by the Supreme Court of the United States:

The Constitution of the United States is a law for rulers and people, equally in war and in peace, and covers with the shield of its protection all classes of men, at all times, and under all circumstances. No doctrine, involving more pernicious consequences, was ever invented by the wit of man than that any of its provisions can be suspended during any of the great exigencies of government.

Idaho State Law only allows the Governor to take emergency powers for a maximum of 60 days as noted in Idaho State Code § 46-1008: 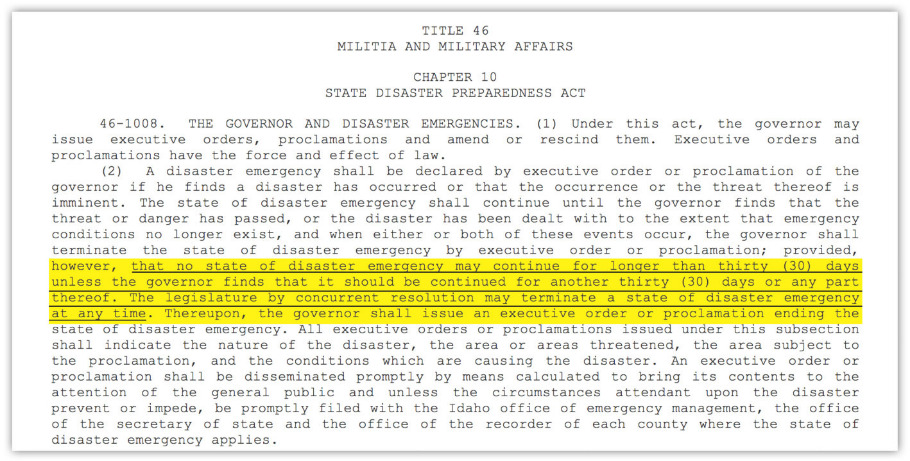 Interestingly enough, Idaho State Code § 46-1008, clearly states that the legislature may terminate the Governor’s emergency powers “at any time.” There is no way that can be logically be interpreted to mean that the Legislature must wait for the Governor to convene a session in order for the legislature to terminate an emergency order. The Legislature has the power to do so on its own, as the statute gives them power to do so “at any time.”

However, Brad Little circumvented this 60 day limitation by citing Idaho State Code § 46-601 which is the section of Idaho Code dealing with Martial Law. You can see it here for yourself:

Here is the citation of these Idaho Statutes in the Governor’s Executive Order from March 25th: 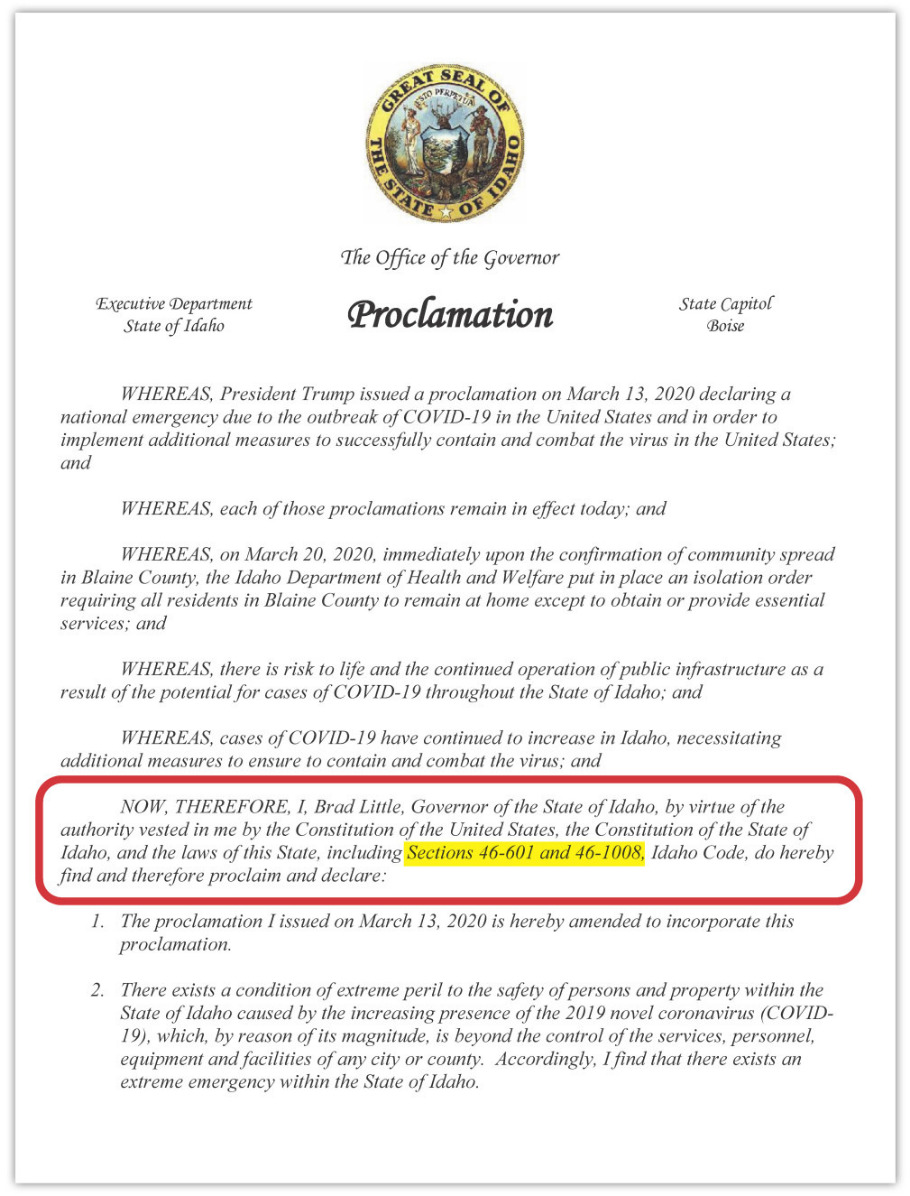 Governor Brad Little used his “emergency powers” to suspend Idaho laws that protect children in state custody and ensure that parental rights are maintained. There have been over 100 rules/laws suspended, but several of those rules specifically eliminate parental rights. Here are an example of three laws which preserve parental rights which were suspended by Governor Little:

The above rules/laws are listed under IDAPA 16.01.01.50 dealing specifically with child care under state custody.

The following pages show exactly where these rules were suspended by the Governor’s executive order.

The documentation shown on subsequent pages can be found in the
Idaho Administrative Bulletin dated May 6th, 2020. 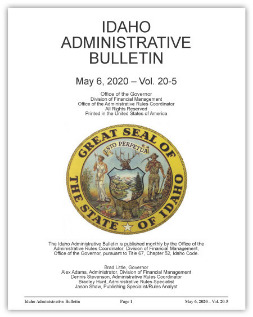 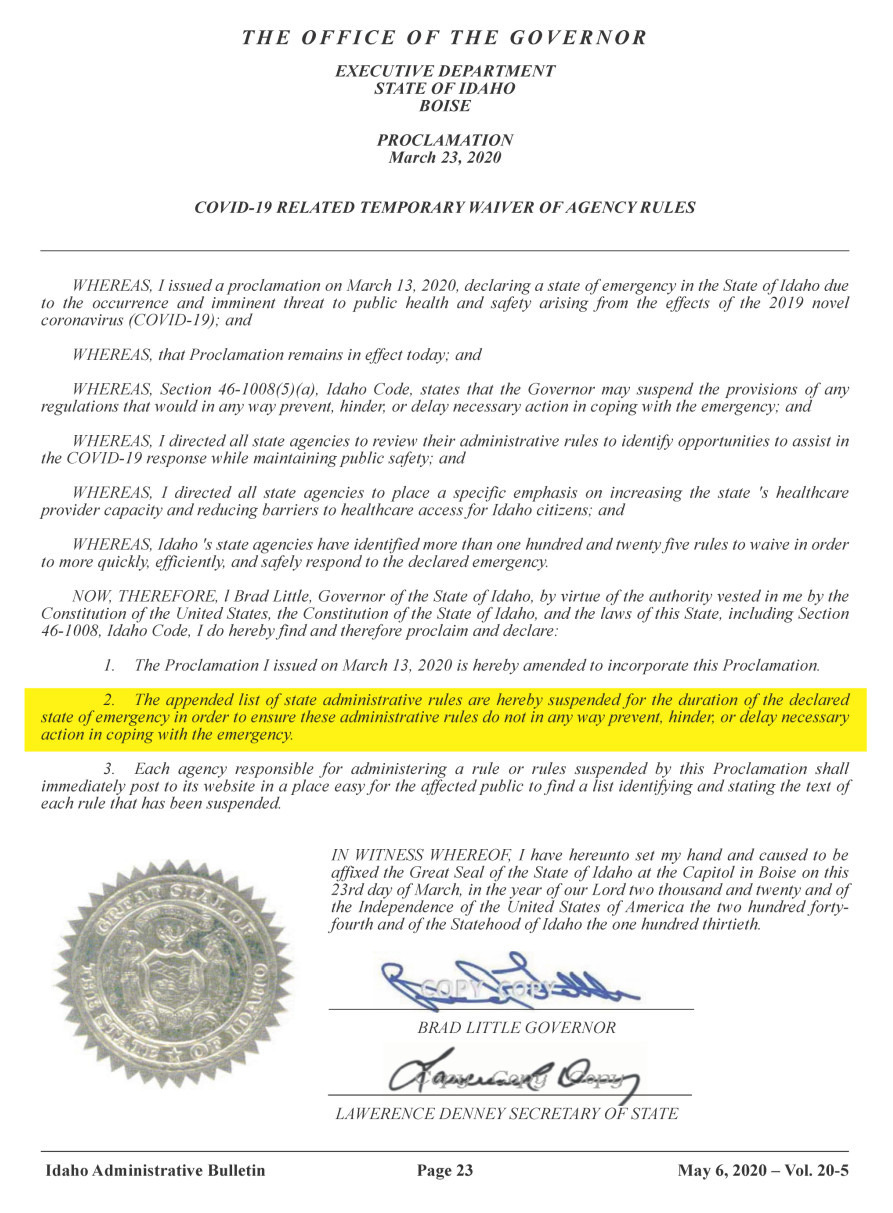 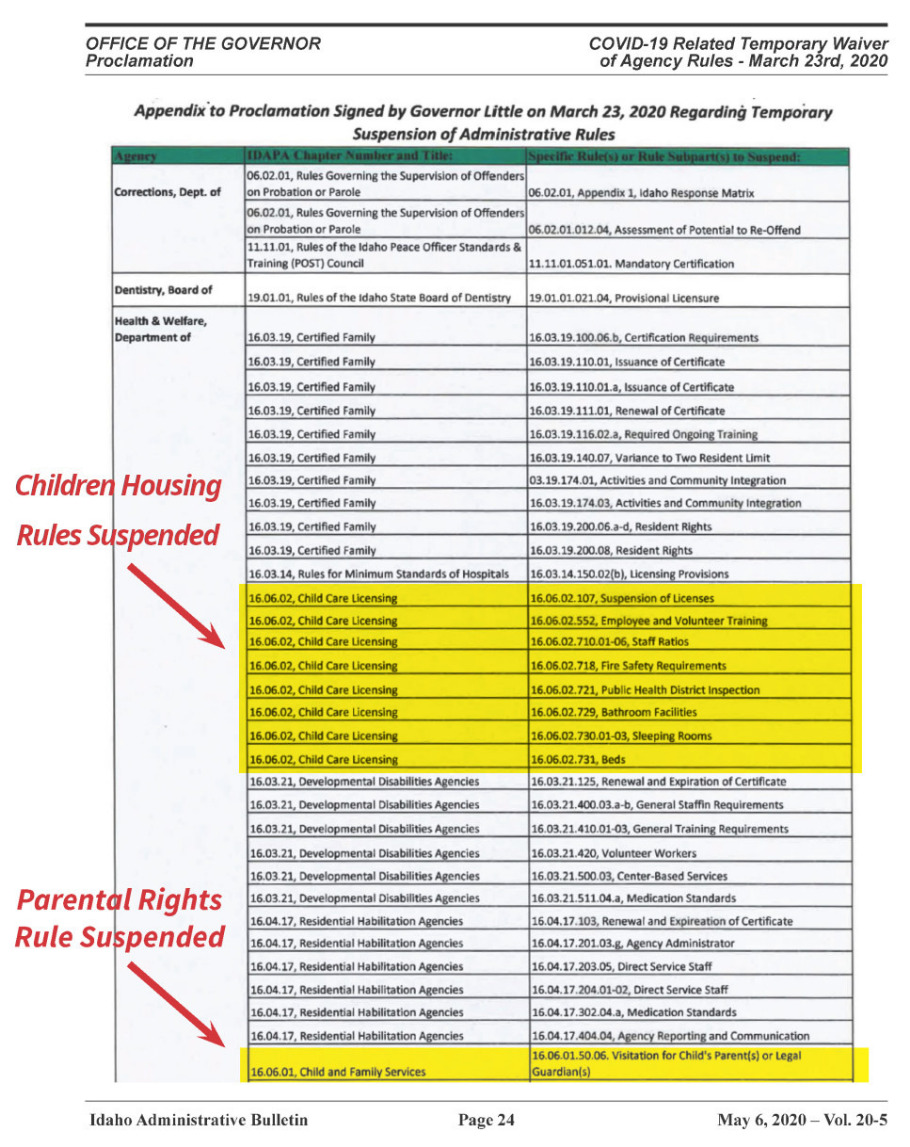 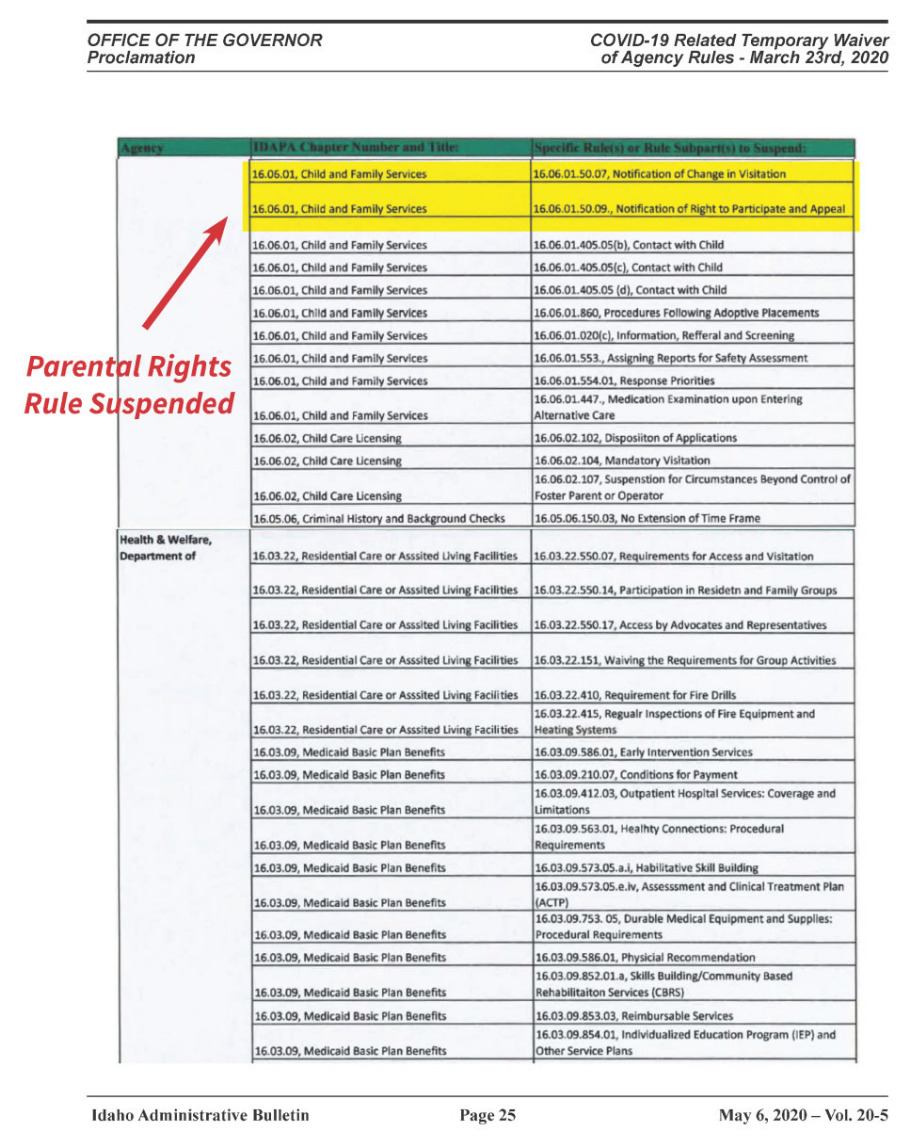 Can you answer these questions?

-WHY WOULD GOVERNOR BRAD LITTLE WAIVE THE RULES THAT PROTECT PARENT'S RIGHTS WHEN THEIR CHILD IS TAKEN BY THE STATE?

-WHY WOULD GOVERNOR LITTLE SUSPEND THE STATE'S REQUIREMENTS FOR HOUSING CHILDREN?

Special Legislative Session is Required by Law on June 23

When Governor Brad Little issued his second Executive Order on March 25th, he did so citing Idaho State Code 46-601 which establishes an “attack” as one of the causes for declaring a “state of emergency” as can be seen below:

The Governor did not specify if his Executive Order was based on § 46-601 (1a) or (1b). Therefore the definition of an attack, according to §46-601 (1a) may be used as the justification for the Governor’s emergency powers.

Appropriately, Idaho State Code § 67-415, defines the word “attack” as “any action or series of actions taken by an enemy of the United States resulting in substantial damage or injury to persons or property in this state whether through sabotage...bacteriological, or biological means or other weapons or methods.”

Not only does the coronavirus crisis perfectly fit this definition, but President Trump has specifically gone on record as saying,

The “actions or series of actions” which occurred that are being used to execute martial law and unconstitutional lockdowns are verifiably confirmed as being an “attack” in two different ways: 1) By legal definition in the state of Idaho, and 2) by additional confirmation from the President of the United States. This means the “coronavirus crisis” which prompted the invocation of emergency powers and then martial law by Governor Brad Little was an “attack,” and is therefore subject to the rules and protocols of Idaho State Code § 67-422.

Remarkably, § 67-422 states plainly that the Governor is supposed to call a session of the Idaho State Legislature within 90 days. And that if the Governor does not call this session, that “the legislature shall, on the ninetieth day from the date of inception of the attack, automatically convene.”

This is a requirement of Idaho State Law, and it means that legislators have the power to end all of this during a special session that must take place according to Idaho Law on June 23rd. This is because June 23rd is 90 days after March 25th, and the law requires the legislature to meet (“automatically convene”) on the 90th day.

In short, not only is there a “mechanism” for the Legislature to convene, there is a LEGAL REQUIREMENT for them to do so, specifically 90 days after the legal definition of an “attack” which Governor Little cited on March 25th. Therefore, the Idaho State Legislature must legally meet on June 23rd.

To Join Your Neighbors in Defending Rights, Text "RIGHTS" to 80123.