CPS & Officers Kidnap Child, Multiple Arrests Made - Is This Really Happening in Idaho?!

The Anderson family was enjoying an evening at a friends house, with their young son, Cyrus, and other family members. On their way home last night, they noticed they were being followed by police, so pulled over at a gas station. Then, things got worse. Their son has been taken into State Custody, under (supposedly) medical supervision... because they committed the crime of missing a follow up appointment for an earlier hospital visit.

First, you need to know what happened - the facts - surrounding this event so you are educated and willing to respond if/when another Call-to-Action is given.  When things happen, they often happen quickly, and there's little time (or manpower) to explain everything to everyone, so please use the information below to become educated.  The same exact thing could happen to you and your family at any time.

What happened Friday night (yesterday), as penned by Cyrus' father, and was witnessed by several others. Several of the events were captured on film.

The Anderson's and the whole Chavoya family were headed home from a nice dinner with friends in Garden City, when a Garden City cop started trailing behind my pickup. I pulled into the chevron gas station to try and stall for some time so Diego and the rest of the family could catch up with us, since they were in a separate vehicle. There were multiple cops surrounding us within minutes. Probably 8-10 cop cars or more with many officers. They said they were looking for us and they had been contacted by CPS and a social worker for medical negligence of our child. After going back and forth and discussing everything for some time, and how Cyrus was doing just fine and nothing was wrong at all, several officers came over and physically pulled me out of my truck, handcuffed me, and put me in the back of the cop car and detained me. They then pulled my sister-in-law Miranda (since she was in the truck with us too), out of the truck and handcuffed and arrested her, mistaking her as Cyrus’ mother. Then they preceded to take Marissa and Cyrus out of the truck and try to remove Cyrus from Marissa’s arms. Marissa was live streaming and not letting them take Cyrus at all, and since she was live streaming they were much more cooperative with her. But they then lied to her and said that she could ride with Cyrus to the hospital in the ambulance. That was just so they could get Marissa into the ambulance, then they physically removed Cyrus from Marissa’s arms even though she was literally pleading with them in every way she could while they were pulling him away from her. Then, they arrested Marissa. After this, we are told they took Cyrus to the Meridian St. Luke’s, but have reason to believe he was actually transported to the Boise St. Luke's instead. Cyrus is being held in State Custody by CPS and all other details are being withheld from us. Marissa and Miranda are bailed out, along with Ammon and Wendy who were also arrested.

More background details can be found here, on the Freedom Man website...https://freedomman.org/cyrus/

This should NOT happen.  And, it especially should not happen here in IDAHO.  As their neighbors, we demand that Baby Cyrus Anderson be returned to the care of his loving parents!  NOW!!

Can we add the statue part of this?

This is the email I sent to the doctor. Feel free to use it as a template and tailor it as you see fit

Why did you call CPS on this loving family??? This family loves their children! What had happened is nothing short of medical kidnapping! As their neighbors we demand that he be returned to his parents immediately!
Kendall Burt @ 03-12-2022 1:50 PM

I am hopeful this message gets to Idahoans capable of acting. This medical kidnapping happens way too often. Family did good to video this encounter. For future, family needs to ask for the name and badge number of all tortfeasors up front. Family needs to verbalize "I DO NOT CONSENT" at least three times. NEVER, I repeat, NEVER Agree with them! Idahoans!: Mutliple Complaints need to be filed with the Medical Board of the pediatrician. Multiple Complaints on the hospital need to filed to JHACO. Records request sheriff's oath of office and bond. We are praying for baby Cyrus and family.
Victoria Dortzbach @ 03-13-2022 11:44 AM

This is a total travesty. I think it is vitally important for all to know, this was not a Doctor (MD/DO) that started this fiasco for this family. It was a Nurse Practitioner (“well child” NP and snake oil functional medicine person) who had no business caring for this child. They as I understand it had been the one to send the family to the ER the first time and after discharge knowing the baby did not digest proteins well made an egregious recommendation the family give this baby goats milk. A real physician would know this is higher in protein than human milk and would make the baby sicker, in very short. NPs have pulled a huge dark curtain over the public’s eyes about their abilities, or lack there of. They are not held accountable for their mistakes, the Board of Medicine does not regulate them, only Nursing and never does anything about the NPs mistakes no matter how terrible. These NPs do not even have to carry malpractice like an MD or DO has to, etc. This was not a Board Certified Pediatrician, hence Medical Doctor, who would have known better and not have created this disaster. Doctors in general are being criticized for something we would not have ever created, a total inept mess. Full Practice Authority for these Noctors where they answer to no one and endanger patients, babies and children, must be retracted in Idaho. It’s dangerous and this situation clearly shows this.
Red Rain @ 03-14-2022 7:36 PM

Please join us outside St. Luke's hospital in Boise, between 10 AM and 8 PM. We will continue until Cyrus is returned to his parents. 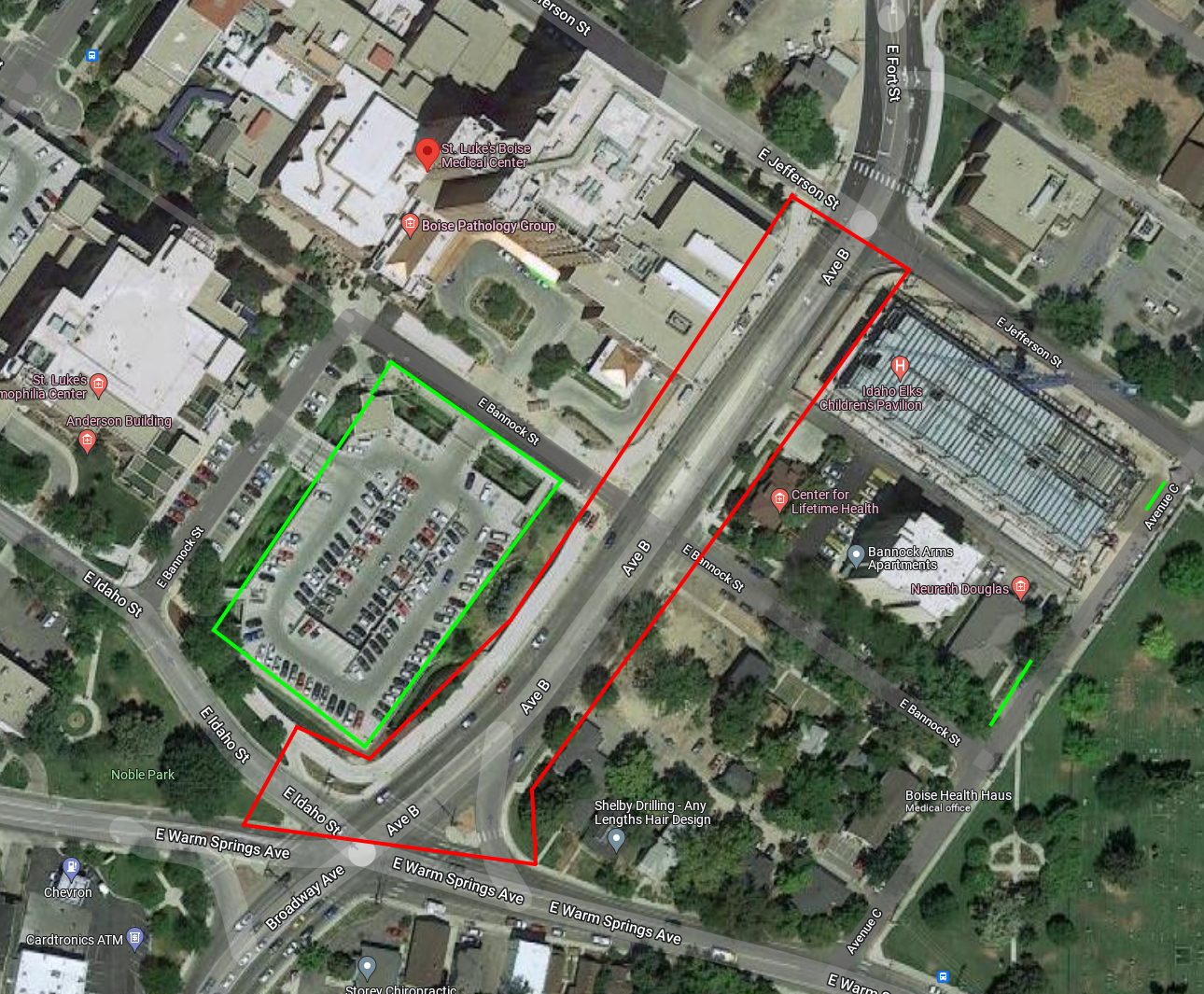 At 2:00 pm our family will be holding a Press Conference at St. Luke’s Hospital in Boise, ID. We will be setting the record straight in regards to what happened to Baby Cyrus and how he was kidnapped by Meridian Police, stripped away from his breastfeeding mother, and how they conveniently “lost” her diaper bag which included her wallet, cash, credit cards, driver’s license and more.We will also expose how Meridian Police illegally arrested my daughter Miranda who was sitting in the truck with Marissa and Levi, claiming to arrest her for “felony endangerment to a child” and accused her of being the mother—when she is not the mother! Imagine being arrested for a false accusation made against your sister!We will also expose how Marissa was lied to and lured away from the support of those filming so she could be arrested in private. Yes, she was promised that she would never be separated from Cyrus if she just complied.We are also calling on legislators, community leaders, and others to put stand against this wickedness and put an end to it once and for all! Please be in prayer and if you are here in Idaho, we ask you to show up tomorrow at 2:00 pm:Baby Cyrus Kidnapping Press ConferenceSunday, March 13th @ 2:00 pmSt. Luke’s Medical Center190 E Bannock StBoise, ID 83712Thank you again for your support!

10am to 8pm Every Day Until Cyrus is Returned.

Protest Updates as of 5:40PM Today

Please visit Freedom Man's website for the latest updates here, including the exact laws broken, the perpetrators involved in this railroad of rights, and the arrest videos. Decide for yourself if things just don't seem right.

Watch here.....  and notice they can't even give her a reason she's not allowed to stay with her child...

Doctor that Called in CPS...

Please light up his phone, and fill his email with your thoughts... 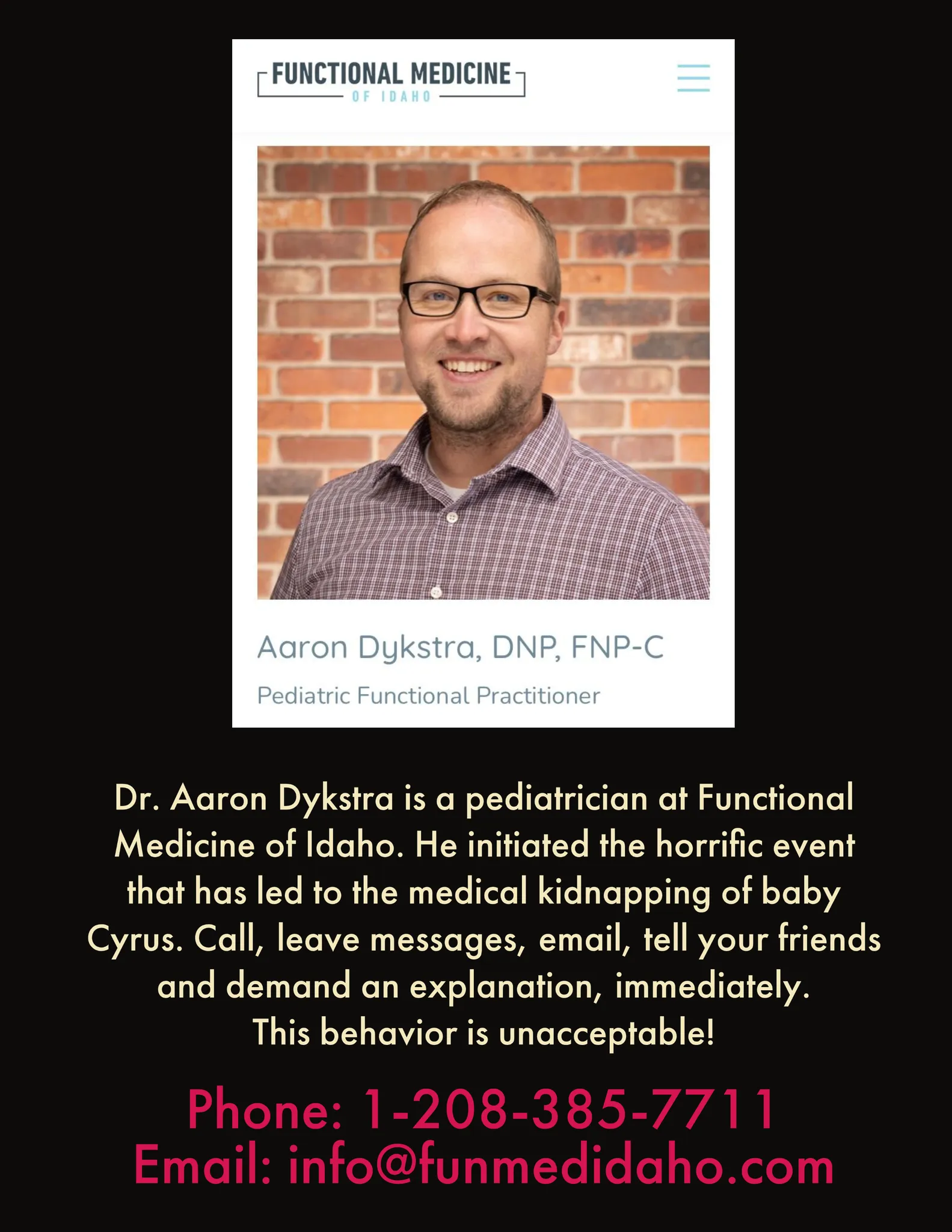 CAN YOU PLEASE HELP US BY DOING THE FOLLOWING 3 THINGS?

From the grandfather of Cyrus, Diego Rodriguez...

We absolutely covet your prayers and ask you to surround Cyrus with your prayers.  Additionally, we are humbly, before God, asking for you to help.  If you’ve ever felt like, “what can I do?” then now is your chance!  We ask that you do the following three things: 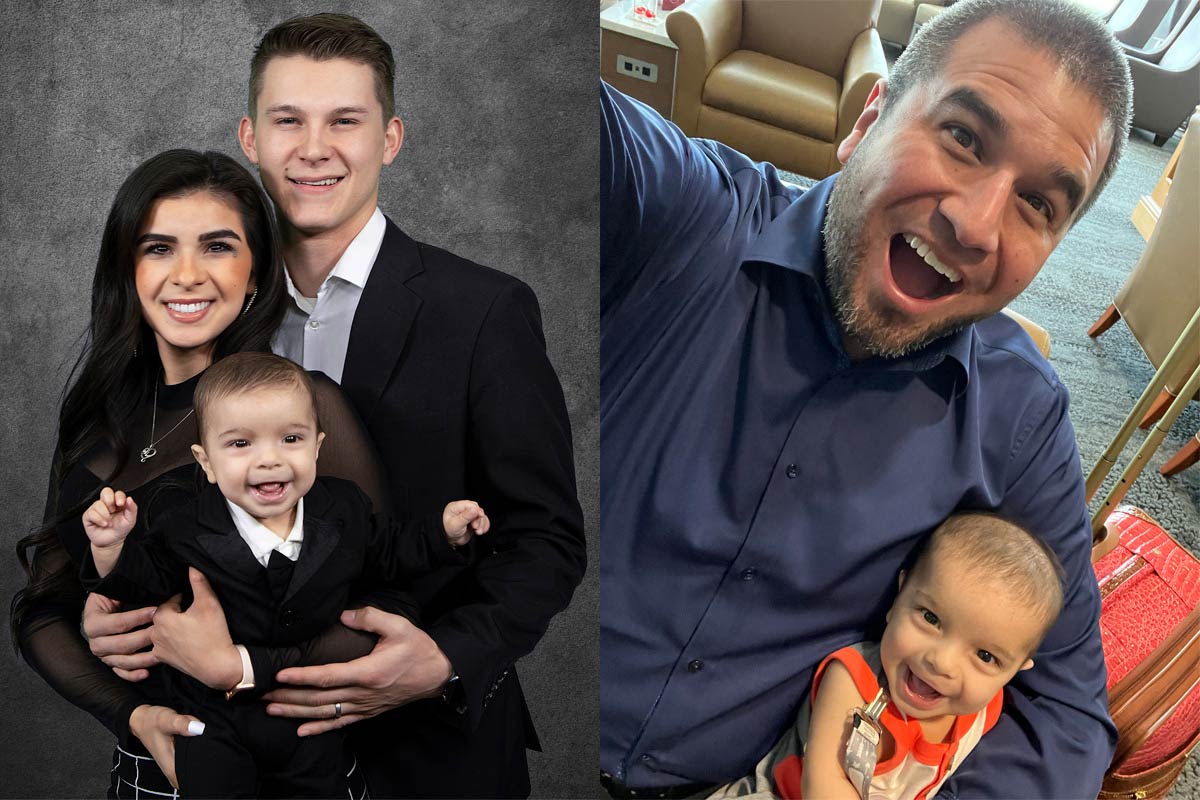