Families Fight for their Private Property in Ravalli County, Montana 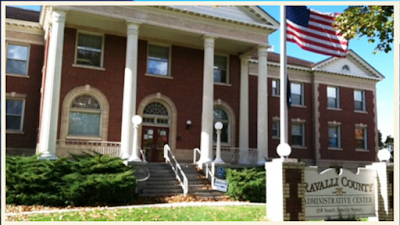 After these communications, County Attorney Corn, in an effort to find more evidence to support the wishes of Ranger Dave, contacted Gary Evans of the Bitterroot Research. Mr. Evans told Corn; “that there is many contradictory documents regarding this road which had a complicated history.” Mr. Evans then joked; “that the only thing any expert could probably testify to was that the county road starts east of the Alta post office.” In the 2009 letter, County Attorney George Corn also mis-represented the fact to the County Commissioners in stating that; “I prepared a motion to dismiss WITHOUT prejudice”, when in-fact he motioned the court to dismiss the case WITH prejudice. (A8)(A9) He further explained in writing that; “One of Dave’s [Ranger Dave] comments was to the effect that since the Forest Service had such a large interest in seeing the gate removed, it was probably better for its attorneys to take the lead in this matter.” (A11)
During George Corn’s investigation of the Hughes Creek matter, he was told by many long standing community members that the facts and history are complicated but lean towards supporting the property owners rights. In fact, in the 2009 letter, Corn wrote that Mike Wiles, the Roads Superintendent at the time; “reviewed the history of the matter with me…he did not believe it was in the County’s interest to try to litigate the matter again.”(A11) As noted earlier, Mr. Evans also indicated, that the history was too unclear to prove where the county road even started and that no expert could honestly testify to the facts correctly. Even with all the advise given and lack of evidence to support that the county road went beyond the private gate, County Attorney Corn, motivated by some unknown reason, continued to waste the tax payers funds and further pursue the issue, by advising the County Commissioners to open litigation back up.
Several official documents strongly indicated that County Attorney Corn was in collusion with U.S. Forest Service personnel and possibly other extreme Special Interest Environmentalist Groups (SIEG), in conspiring the taking of private property owned by the Cox family and others who had acquired land in Hughes Creek drainage area. And to further motivate the County Commissioners to adversely act against the property owners, after communication with George Corn; “Gary [Barry] Paulsen, Acting Forest Supervisor of the Bitterroot National Forest, sent a letter to the Commissioners offering assistance in removing the gate.” In official documents, Corn also acknowledges that he was in communication with; “a member of the Ravalli County Fish and Wildlife Club”, another SIEG organization (A6)(A11).
It was around this time that Jay & Tracy Bugli began the acquisition process to purchase a portion of the Hughes Creek property from Wade & Charleen Cox. However, before they made the purchase, Jay inquired on the matter of the road with County Commissioner, Greg Chilcott. Commissioner Chilcott informed Jay that; “The county has no interest in pushing the matter, that they had plenty of other issues to deal with.” Jay moved ahead and purchased the property (A16). Due to the lack of action, it appears that the County Commissioners did not take the bait County Attorney George Corn was giving. Sometime during Corn’s attempt to push the commissioners towards the will of the U.S. Forest Service and the SIEG organizations, George Corn was voted out of office. He was replaced by Bill Fulbright, who remains as the acting Ravalli County Attorney today. Ranger Dave Cambell, the U.S. Forest Service and the SIEG organizations took a significant blow when George Corn was not re-elected as the County Attorney. It took them several years to regroup and make their next move against the Hughes Creek property owners.
For nearly a decade after George Corn was removed from office the property owners in the Hughes Creek area peacefully used and benefited from their private property without threat or intimidation from the U.S. Forest Service or SIEG organizations. Then out of the blue, each of the property owners received a letter in the mail from the Ravalli County Commissioners, dated January 14, 2016 (A10). The letter informed the property owners that the commissioners will be holding a public meeting. And stated; “The purpose of this meeting is to discuss the locked gate on the Hughes Creek Road…” Interestingly enough the County Commissioners informed the land owners in this letter the they had also; “Invited staff from the Bitterroot National Forest Service…[to] be present.”
After some digging and communication, the property owners noticed that the newly elected County Commissioner, Jeff Borrows, was leading the charge to raise the ugly head of the almost dead Hughes Creek access dispute. In a need to understand why Commissioner Borrows would regurgitate this old issue, the property owners began an investigation of their own. They discovered that Jeff Borrows was the next door neighbor to Dave Cambell (Ranger Dave). They also discovered that two businesses are registered to Jeff Borrow’s residence. One by the name of Wildfire Rentals and Sales, Inc. and the other using the name of Wildfire Development Company. Both of these businesses show that their significant income is based entirely on contracts from the U.S. Forest Service (A7). Additional, Jeff Borrows has a degree in environmental engineering and speaks the same language and holds the same beliefs as most in the U.S. Forest Service community and the Environmentalist Special Interest Groups (SIEG). Also, during this investigation the property owners uncovered strong evidence to indicate that Ranger Dave Cambell was a member of at least one SIEG organization by the name of Public Land & Water Association (PLWA). 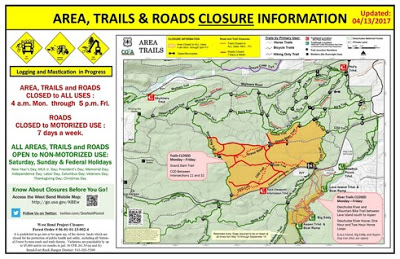 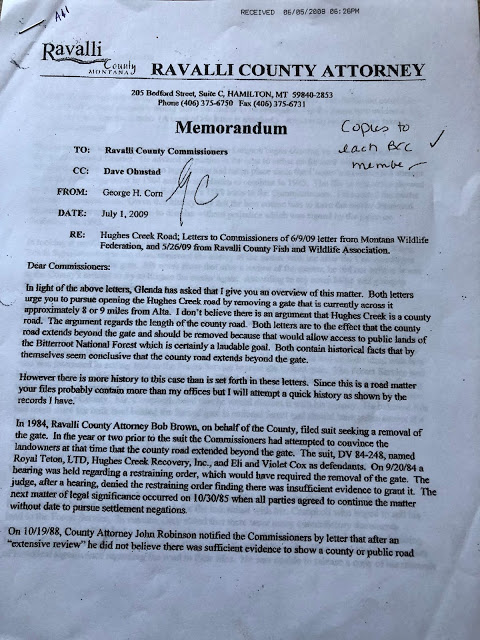 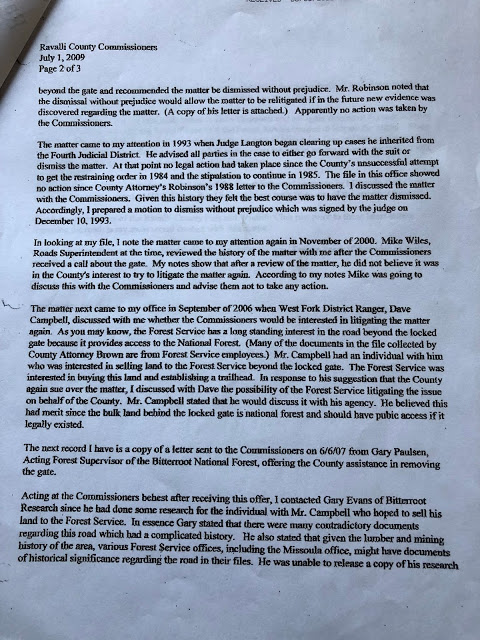 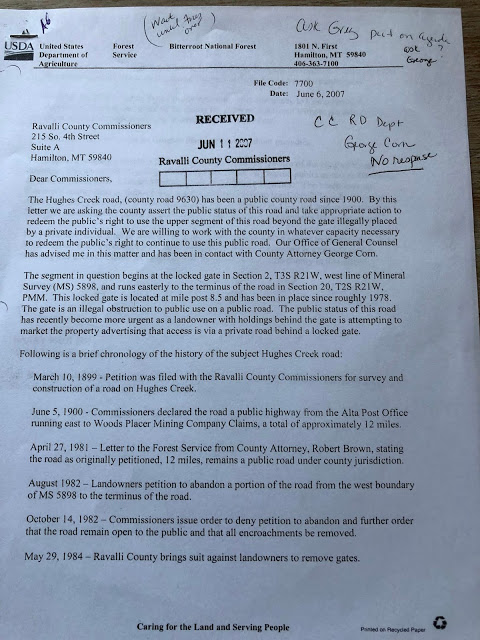 Court Document on Letica v. Anaconda Deer Lodge County CaseA18The PLWA Changing their website from "Victory" to "This Victory was short lived" when the Court overturned the County Commissioners decision on the Letica case. A13A19
Montana Code 7-14-2615, Road Abandonment -does not apply to private roads and can be abandoned if all owners approve.
A20 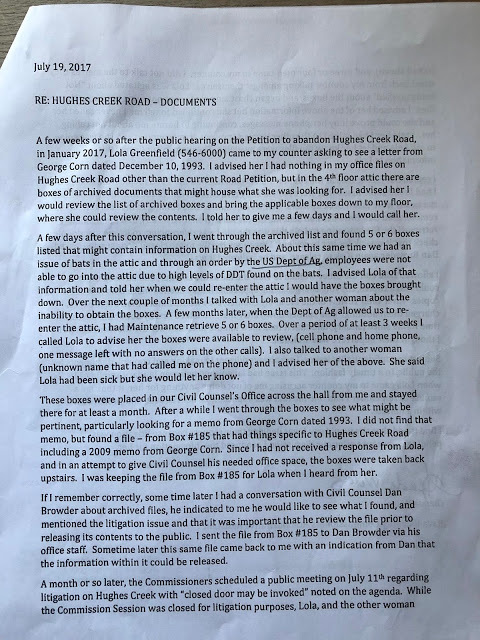