Idaho officers that stood for the People during the COVID lock-downs are being investigated by the FBI. One Caldwell Lieutenant has been prosecuted in the federal courts and is now being sentenced. Please read the details in this LETTER TO THE COURT.

Idaho officers that stood for the People during the COVID lock-downs are being investigated by the FBI. One Caldwell Lieutenant has been prosecuted in the federal courts and is now being sentenced. Please read the details in this LETTER TO THE COURT. 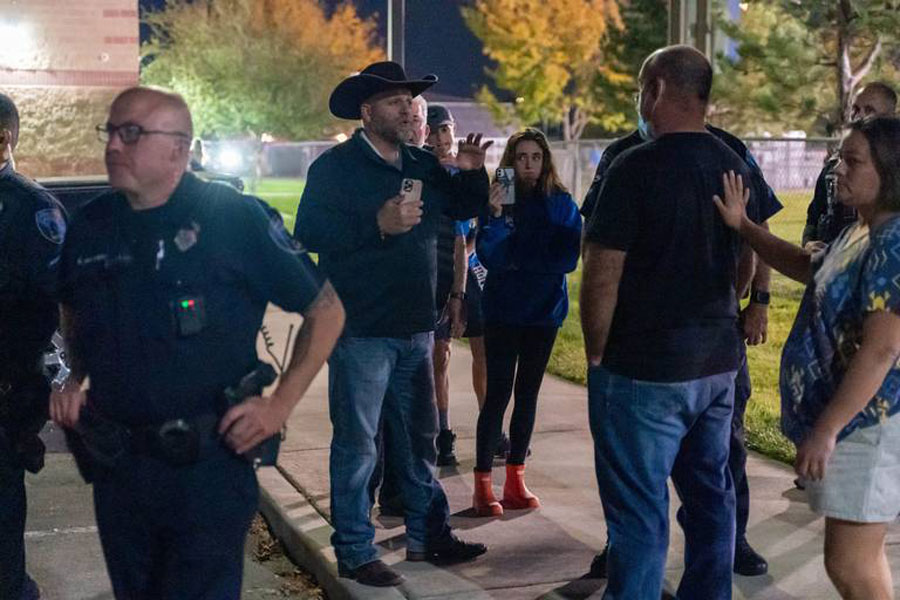 FOR THE DISTRICT OF IDAHO

Letter to the Court,

I come to you with great concern for the sovereignty of the State of Idaho and for the needed protection of our police officers in this enabled state.

On October 2, 2020, Lieutenant Joey Hoadley, a Caldwell Police officer was dispatched to the Caldwell High School, along with several other officers. Lieutenant Hoadley was the commander in charge that night. When the Caldwell police officers arrived at the school a football game was taking place and my family was standing outside the fence next to the parking lot at the back of the football field. My family and I had been denied entrance into the game because of a mask requirement. We were told that, “We were required to wear a mask to come through the entrance gate and then we could take them off once inside the field”. After being denied access, my family and I walked down the sidewalk to watch the game from the parking lot. One of the football players was our son, grandson and brother and we came to Caldwell to watch him play, just as we have with all the other football games that season. This was the first time any school administrators had required masks to get into the football field and we did not expect to be turned away. Nonetheless, no member of our family argued with the Caldwell High School staff, never did we try to push our way in or try to make a scene. We simply walked down the fence line, along the outer sidewalk and began watching the game from the parking lot.

Approximately 30 minutes into the game a couple of Caldwell High School administrators came to me and said I could not watch the game from the parking lot. They specifically came to me, no one else. Several other people besides my family were also watching the game from the area, including people in their vehicles. I can only assume the reason they were watching the game in that area was because they too were denied access at the gate. I did not know any of them and no Caldwell High School staff said anything to them about leaving, only to me.

During the discussion with the Caldwell High School administrators, I explained that I had a son on the football team and came to watch him. I assured them that I was only here to watch my son play football. I also informed them that I had tried to pay the normal ticket cost to watch the game outside the fence, but was denied. I assured them that I was still willing to pay for my family to watch the game from the parking lot even though it was obstructed and not a good place to view the game. The school administrators informed me that, “The school superintendent directed them to not allow me to watch from outside the fence and have me removed from the school property if I would not leave”.  I eventually refused to leave, making the stand that I was not harming anything, I was not being disruptive and that I had come to watch my son play football. The Caldwell High School administrators left for a time but were again directed by the school superintendent to have me removed, returning this time with a Caldwell police officer. I must mention again; by this time several groups of people were watching the game from the same area as I was, but never at any time did any Caldwell High School staff confront them and ask them to leave, only me with my family.

Eventually, several Caldwell police officers showed up to the area (including Lieutenant Joey Hoadley). After some discussion, including among themselves the Caldwell police officers informed me that they were not going to arrest me or remove me from the property because I was not breaking any law or being disruptive in any way. Being the commander in charge this decision would have ultimately been made by Lieutenant Joey Hoadley. The Caldwell officers further informed the High School administrators that they would not be arresting me or removing me from the property. For a period of time the school administrators left the immediate area along with the Caldwell police officers and I had hope that the matter was over. The entire time the football game was going on and therefore I went back to watching the game.

Approximately 20 minutes later the Caldwell High School administrators returned and informed me that Caldwell School Superintendent, Shalene French, directed them to tell me that if I did not leave she would end the football game at halftime. It appeared to me that Mrs. French was upset that the Caldwell police would not remove me and therefore she was going to use her power to punish everyone at the game. Later, Mrs. French tried to claim there was a threat and that is why she called the game at half time. But, all of those claims have proved to be unsubstantiated and factually incorrect. Simply put, Lieutenant Hoadley and the other Caldwell police officers saw that I had broken no law and posed no threat and therefore they had no authority to arrest or remove me from a public facility. They upheld my rights according to the law, even under excessive pressure from Superintendent French.

This incident was video recorded almost from the beginning to end and it became national news for several days. “Coincidentally”, just a few days later, the FBI began investigating none other than Lieutenant Joey Hoadley and the other police officers that stood for my rights that night. The FBI dug deep into their files looking for anything they could fester up against them.

It is no secret that the FBI has serious animosity towards me and my family. After all, the FBI caused my father, brothers, I and others to be falsely imprisoned for two years without conviction. Based upon a lie the FBI fabricated by purposely connecting the facts incorrectly and hiding exculpatory evidence in their possession that would exonerate us. This type of action has become the FBI’s M.O. However, during a federal trial we were able to expose the FBI’s criminal behavior toward us and District Judge Gloria Navarro dismissed the case with prejudice, finally returning us home to our families after two years. This made huge waves inside the U.S. Department Justice and gave the FBI a major black eye, further eroding their once good reputation. So, I don’t believe that it is a coincidence that Lieutenant Joey Hoadley and the other Caldwell police officers who stood for me that night came under investigation by the FBI just days after the Caldwell football game.

So, Judge Skavdahl, which is it? Are all of these investigative state entities corrupted and covering for Lieutenant Hoadley, or is it the FBI that is corrupted?  Is Chief Wyant, Captain Riley, the Canyon County Prosecutor’s Office, the Ada County Prosecutor's Office, the Idaho Attorney General’s Office and the Idaho POST Academy all so corrupted that the FBI has to come into Idaho and clean up our mess? Heaven help us!

Idaho can, should, and in this case did police their own officers. The FBI has no constitutional jurisdiction to come into the State of Idaho and prosecute and imprison our police officers! We have strayed a long way from what the uniting of the states in America was founded upon. I do not completely know your involvement in this case, other than being the presiding judge, but I hope you consider the ramification of this case when it comes to the doctrine of statehood and the right and duty the State of Idaho possesses to protect its officers from federal prosecution and imprisonment.

As you are very well aware of, Lieutenant Joey Hoadley was found “not guilty” of the original charges of “Deprivation of Rights”, but was convicted of appending charges linked to the “FBI’s investigation” after being cleared by ALL state entities who investigated the case. Now, his reputation and life have been turned completely upside down and he is facing up to 20 years in federal prison with a dim future of any real occupational opportunity when he gets out. The FBI has succeeded in ruining his life! However, I pray that you will have mercy upon him at sentencing. Guilty or not, I do not believe this case should have been allowed in your court or any other federal court for that matter. But since we are here, I plead with you to have mercy upon Joseph Alan Hoadley and I pray for you, him and his family.

Lieutenant Joey Hoadley could use our support right now, if you would like to express your support please send him an email to:  caldwellstrong208@gmail.com

I certify that on this date I served a copy of the attachment to: 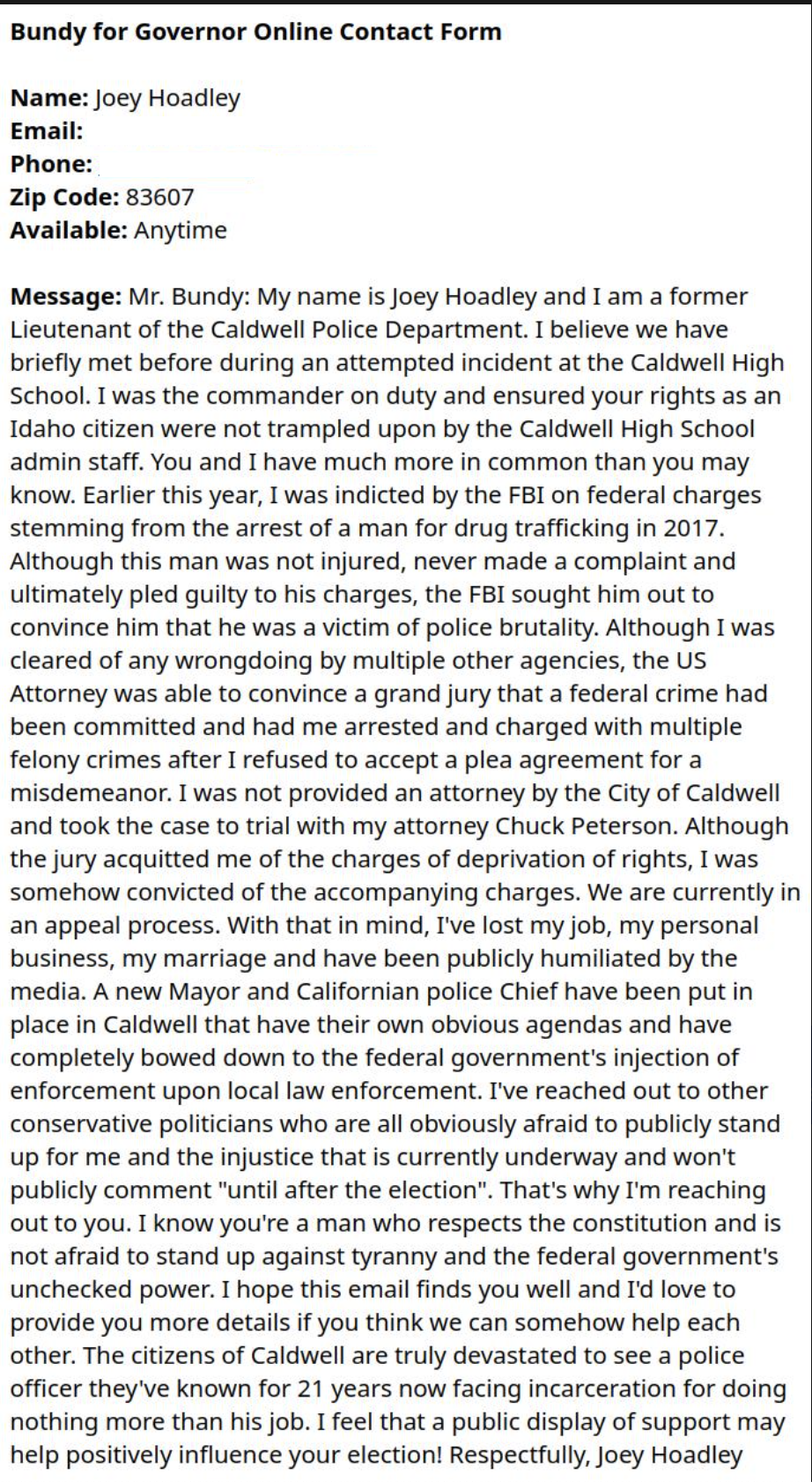 I met Lt. Hoadley after Bryan Taylor told Caldwell PD to treat SWDH as private property and I thought he was a stand up honest down to earth guy, not your typical power hungry officer.

My guess is his honesty and his ability to maintain his morality is why they feel the need to set an example to the other officers. Obey or pay!

This officer does good work and most all of our Idaho officers are very kind, respectful and honor our Constitutional Rights. The FBI is just being vindictive and petty in these attacks. I fully support our local police in this situation. I will be contacting the AG office and give support.
Cami Harris @ 11-20-2022 5:34 PM

Questions and comments can be emailed to AGWasden@ag.idaho.gov.