By Chris Nelson. February 28, 2022. Join us on the steps of the Palm Beach Courthouse TODAY, 205 N. Dixie Highway, West Palm Beach February 28, at 230pm as we rally for Cindy Falco Dicorrado. Cindy was found guilty of trespassing and resisting arrest stemming from an incident on January 14, 2021 where she refused to wear a mask in Einstein's Bagels on Glades Road in Boca Raton. Cindy is a licensed Minister and was meeting with her friend Jessica who had recently had a baby. Jessica intended to have an abortion but through Cindy ministering to her, she decided to have the baby and little Serenity was born. Cindy was meeting with Jessica at Einstein's Bagels to counsel her on some personal issues she was having. 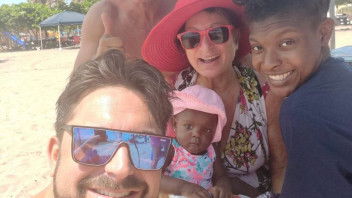 Cindy and Jessica with little Serenity on July 4, 2021

Cindy was in compliance with the Palm Beach County Facial Coverings Directive which provides an exemption for "Persons for whom wearing a facial covering conflicts with their religious beliefs or practices." Cindy carried a religious exemption document with her at the time of the incident. Video taken by Cindy shows a man named Christopher Lawrence Orellana, an employee of Delivery Dudes, began heckling Cindy and Jessica over Cindy's bare face before Palm Beach Sheriffs arrived. Einstein's Bagels Manager Anne Marie Campian is seen in the video and the one who called the police. A video taken by Orellana posted to a Twitter page shows Orellana was heckling both Cindy and Jessica. Jessica was also denied service even though she was wearing a mask. Video of Palm Beach Sheriff's grabbing Cindy and dragging her out posted to the same Twitter page "Crazy Karens" was mocked by the hateful pro-maskers (read the hateful comments) and garnered 5.5 million views. Video taken by Jessica of 62-year-old Cindy being slammed against a Sheriff's vehicle was taken by Jessica. A rally was held for Cindy outside the Palm Beach Jail. Cindy was released on bail. Instead of dropping the charges which has been the case for many in this situation, State Attorney Dave Aronberg did not. Cindy faced judge Ashley Zuckerman and was found guilty by a jury of Trespassing and Resisting Arrest without Violence. Cindy now faces two years in jail. View referenced videos of the incident HERE.

Last year when Mike and Jillian Carnevale were offered a pardon on Live TV by Governor Ron DeSantis for the charges they faced stemming from their decision to not require masks at their gym, Governor Ron Desantis promised to pardon "any Floridian" who violated mask or social distancing mandates. A Trespass charge based on the refusal to wear a mask when the individual holds a valid religious exemption certainly counts in Governor DeSantis's promise. Cindy has requested an official pardon from DeSantis and his office has been made aware of the situation. Today at 230pm there will be a rally at the Palm Beach Courthouse, 205 N. Dixie Highway, West Palm Beach, as we call on Governor Ron DeSantis to offer Cindy a FULL PARDON. Cindy is also a Candidate for Mayor of Boynton Beach. 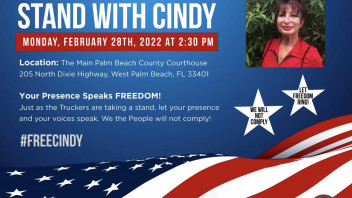 Judge Ashley Zimmerman set aside Cindy’s sentence and Cindy walked away FREE! A victory!!! Cindy had a huge outpouring of support and we were all allowed to speak before the judge!