PLEASE BE AT THE CLARK COUNTY COURTHOUSE, MONDAY 3/29 @4PM. 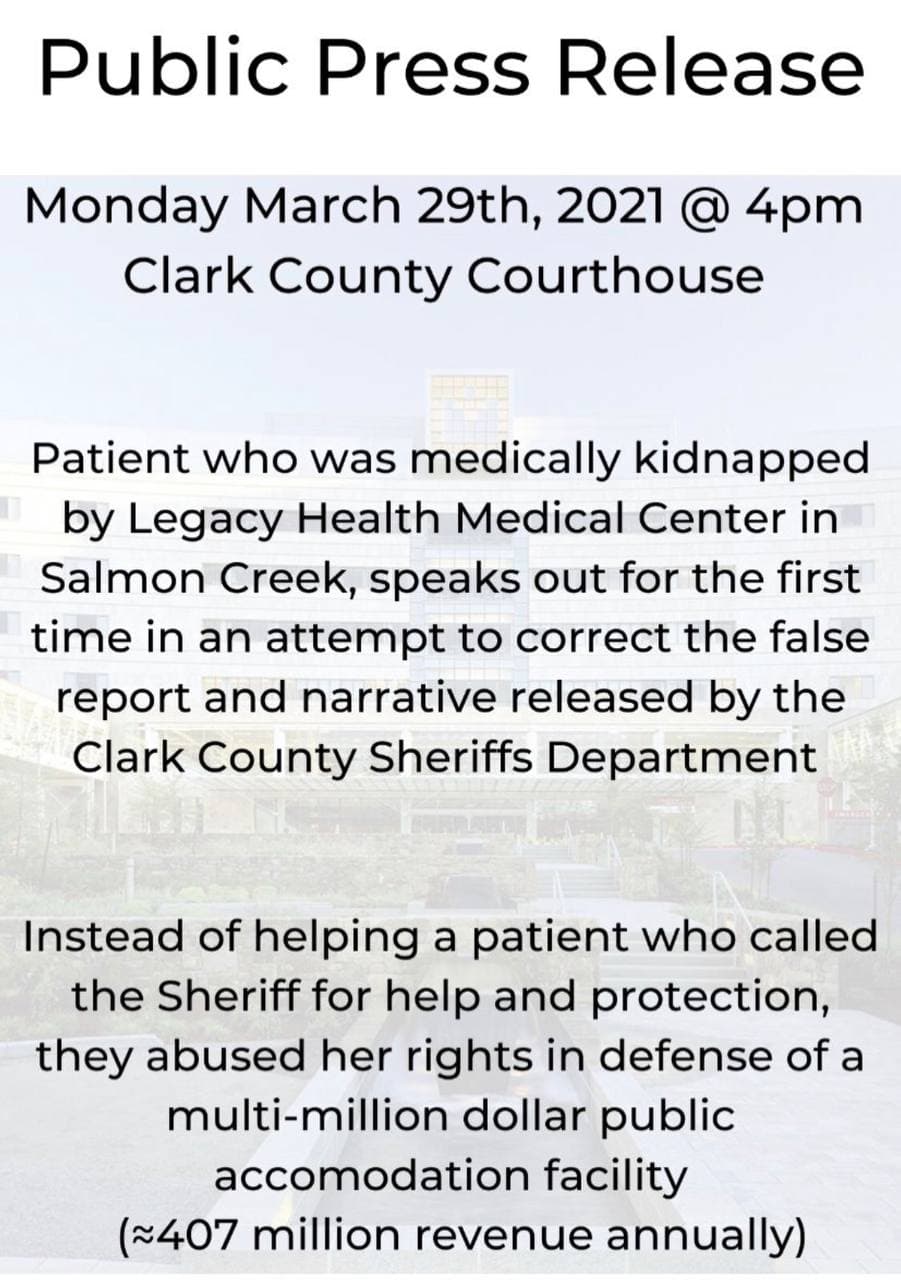 Many of you remember the very scary medical kidnap situation, at Legacy Salmon Creek, on 1/29/21, in Clark County WA. Our dear 73 yr old friend Gayle, had been admitted to the hospital the night before with severe confusion from a UTI. It was recommended that she spend a night or two in the hospital for some extra fluids while they started her on antibiotics. Her daughter/caregiver stayed with her until 4am, and then went home to rest. The hospital knew she was not to be Covid tested or vaccinated. The hospital also told the daughter she could come back any time as long as Gayle's visitor remained the same throughout her time at Legacy. Her daughter, Satin, is also her full time caregiver, as Gayle has short term memory loss from brain tumors. (Gayle asks for our names and asks if she has ever met us before, even though most of us see her weekly. She tells us the same stories every time we see her, as she can not remember she has already told them before. To say she needed an advocate at the hospital that. night, is an understatement.)

Upon returning to the hospital the following day, her daughter/caregiver and POA, entered (with a mask on as she always does at the hospital) and was told her mother was now in quarantine and on oxygen and could not be seen. First they said it was because she had been tested for Covid, against her daughters wishes. This was startling to imagine they would have violated their agreement with the patient and the family to NOT test. Then an hour later they changed and said she was quarantined because she refused to Covid test. When the daughter became concerned from their mixed stories, she requested to withdraw her care from Legacy, but she was denied. When the daughter demanded access to her elderly mother at Legacy, she was denied and even hung up on by the staff.  Gayle called her daughter and asked to come home, which was heard by everyone in the parking lot that afternoon as the call was on speaker phone.

Satin called the sheriff and her closest friends for help, unsure of what to do next. She was scared and in fear for her mother's safety. Her friends came and peacefully made their requests known to Legacy, 'Release Gayle Meyer'. They pleaded with the public for help, thinking perhaps this might be the best way to resolve the situation and make sure Gayle's requests were heard. The hospital refused. When the public called the Sheriff for help, they were told no deputies would be responding. To those present, they report the night felt like a scene from a bad movie where nothing made sense. An hour later, the hospital called the deputies and they arrived with over 30 officers! They even spoke to Gayle without an advocate and she was completely confused and thought she was in trouble. They were not there to deescalate the situation or reunite this mother and daughter, instead they came to block doorways with tear gas and helmets and would not even speak to the supporters who were begging for help. At one point, the daughter tried to enter the hospital to fill out paperwork to discharge her mom, as she knew she had a legal right to carry out her mother's requests for discharge, but the deputies used force to throw her out. This was not only shocking to the conscience, this was an absolute violation of the deputies oath to protect and serve the public. A couple hours later, Gayle was released, and everyone was able to breathe a sigh of relief. Or so they thought ....

Now, Clark County Sheriff detective, Tonya Johnson, has signed probable cause warrants for the arrest of 4 people who were there that night, including Gayle's own daughter and caregiver, Satin Meyer.

The false charges are criminal trespass in the first degree (no one was ever trespassed!) and inferring with a medical facility (No one interfered with a medical facility, they only advocated for the release of a patient!). If the judge signs the warrants, they face up to 2 years in prison and thousands in fines. Satin is not only Gayle's full time caregiver, but also a single mom. It seems criminal that a hospital could deny a patient access to their caregiver and POA, give mixed medical information to the family, refuse to allow a patient to be released, and then claim to be the victim of the entire situation.

This is beginning to look like political targeting more than anything else. The media and those in power continue to do their best to:

Isolate, Demonize and Destroy anyone who dares to say no.

Please join us at the Clark County Courthouse Monday, 3/29/21 at 4pm, to hear from the patient, Gayle Meyer, for her first public statement since the night of her medical kidnap. Also, the other listed 'suspects' will be there to tell what really happened that night, contrary to what the media, the hospital and the sheriff's department has reported. Please come support them and learn the truth. Sunlight is the best disinfectant. The only thing evil needs to prevail, is for good people to do nothing.

Your presence, your prayers and your support are greatly needed.

Do what is right and let the consequences follow.